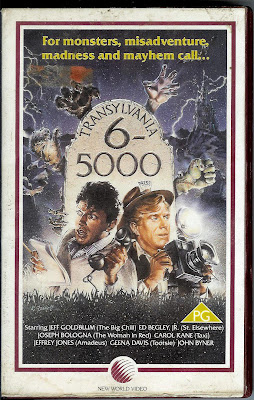 £1, I think? From the used furniture shop up the road from my old flat, I think?

“Fear meets hilarity head on as two less than competent reporters attempt to unravel the mystery of modern day Transylvania. During their search they meet a bizarre assortment of loonies and throwbacks.”

Before we get going on the slightly more highbrow VHS haul I wrote about last week, time to take out the trash. And if you can honestly say you don’t have room in your life for a mid-80s horror comedy starring Jeff Goldblum and Ed Begley Jr, well, you’re a better man than I. If you can actually make it to the end of this thing though… well I guess that makes us about even.

The set-up is thus: Goldblum and Begley are reporters for a supermarket tabloid. Jeff is the wouldbe suave, wisecracking one who wants to be a serious journalist. Ed is the bungling son of the editor, eager to impress his dad. The paper has acquired a videotape that shows some dudes apparently being attacked by Frankenstein’s Monster (this footage is actually one of my favourite parts of ‘Transylvania 6-5000’, if only for the fact that it kinda reminds me of Jess Franco’s ‘Dracula, Prisoner of Frankenstein’). So, the editor wants to dispatch Jeff and Ed to Transylvania to come up with a front page expose on Frankenstein in three days, or else.

At this point, some questions will invariably trouble the inquisitive viewer. Why would a tabloid editor order his staff to make up a nonsense story irrespective of the facts, and then insist they travel halfway across the world in order to achieve this? Why would you go to Transylvania to look for Frankenstein anyway? And most pressingly, why does the film’s sub-Huey Lewis & The News theme song, in which the name of the film is frequently repeated, completely fail to make any reference to the Glen Miller composition from which the rib-tickling pun is taken? I mean, that would seem like the obvious thing to do, right? And if the reference was deemed too old-fashioned or esoteric for the movie’s target audience, well WHY DID YOU NAME YOUR FILM AFTER IT?

Anyway, I realise this sounds kinda alright so far (ok, it sounds completely stupid, but y’know what I mean). Before we go any further though, I should make clear: ‘Transylvania 6-5000’ is terrible. I guess I’m usually not too demanding when it comes to screwball comedies, but rarely have I encountered one as comprehensively unamusing as this. Blame it on a combination of corny script, woefully poor timing and actors clearly losing the will to live, but suffice to say, every attempted witticism, every moment of slapstick japery, falls straight to an undistinguished death. And, this being broad Mel Brooks/Zucker Bros style humour, when the gags fail, there’s nothing left. Just an eerie silence, and occasional moments of accidental weirdness to stop us losing interest entirely.

Following our obligatory plane flight montage credits sequence, Jeff and Ed arrive in Transylvania. Apparently back in 1985, Transylvania was a sovereign state that existed outside of the influence of the Soviet Union, and had a populace who all spoke perfect English. The ‘capital’ of Transylvania also looks a lot like a small town in rural France. Crazy stuff, huh? Anyway, at the very least we can give thanks to the filmmakers for choosing to forego the obvious notion of portraying Transylvania as some kind of spookshow monster paradise, largely sparing us the pain of ninety minutes of soul-withering claptrap about vampires with toothache and werewolves going to the barbers and such. Unfortunately however, they instead opted for the next-worst idea, populating their whimsical Eastern European locale primarily with sub-normal comic relief characters of the most odious kind, each of them determined to batter us with their one joke shtick until blissful unconsciousness sets in.

When Jeff and Ed arrive at the castle/hotel where they’re staying, they are greeted at the front gates by the goofball butler character who, in what might just be an inspired bit of meta-commentary, is an incompetent slapstick comedian whose shtick is that he is constantly trying to impress the American guests with his poorly-conceived, prop-based routines. When he opens the door for them, he is clowning around with a creepy ventriloquist’s dummy. “Ah, hahaha, you see, it is funny, yes?” he yells desperately, as our protagonists look on silently – a perfect microcosm of the whole experience of watching ‘Transylvania 6-5000’.

When this butler guy was first introduced, I thought he was just about the most obnoxious character I’d seen in a movie for some time. But as the film progressed, his senseless enthusiasm and sheer bloody-minded persistence actually began to win me over, until I ended up thinking he was just about the best thing in this movie. At one point, he physically attacks a terrified looking Begley, dragging him across a courtyard in order to force him to take part in a banana skin slip-up routine. Later, Begley is searching the castle in search of a secret passage when he opens a door and finds this inexplicable cretin confined in a closet-sized space, riding a mechanical bull. “What the hell are you doing?”, asks Ed, not unreasonably. “Meditating”, the guy replies. I wouldn’t go so far as to say any of this is funny, but at least it’s really weird, which counts for something. I thought that butler-guy looked pretty familiar, and the endearing oddness of his character began to make perfect sense after I looked him up on IMDB and learned that he was none other than Michael Richards - Kramer from ‘Seinfeld’. But of course.

Trawling my memory for other positive things to say about ‘Transylvania 6-5000’, it is probably pertinent to mention a memorable cameo by Geena Davis as a vampire lady in a sexy Vampirella-esque outfit. I, uh… I thought she was pretty hot. Which is an admission that’s alarming on all kinds of levels, now that I think about it. Let’s pretend I never said anything. Also, much of the film is shot in some cool, dilapidated Eastern European locations that are sometimes quite atmospheric, if you can ignore the stupid stuff that is actually happening in them. I guess it’s much like a latter day Charles Band film in that respect.

Towards the end of the movie, assorted monsters turn up – a Frankenstein monster, aforementioned vampire lady, a mummy, a wolfman, a mad scientist – and for fifteen minutes or so they all run around causing light-hearted havoc… which is fine, depending on how much you’ve had to drink, and how much you like early ‘60s-style ‘monster mash’ antics. Naturally, it transpires that all these monsters are simply misunderstood individuals suffering from unfortunate conditions of one kind or another, and that the mad scientist is merely a nice guy trying to help them. Oh, such heart-warming hilarity. As you might expect, all these final reel ‘explanations’ are pretty cringeworthy, the most uncomfortable being that of the mummy, who under the bandages is – get this guys – an UGLY GIRL, who the philanthropic doc has helped out via the application of full body plastic surgery, so that now she’s popular with the village yokels who previously shunned her, and thus happy. Ha ha - it is funny, yes?

Tedious, annoying and morbidly chuckle-free throughout, if ‘Transylvania 6-5000’ achieves anything, it is probably to remind us how lucky we are to have both ‘Young Frankenstein’ and ‘The Man With Two Brains’, and to increase our admiration for the way those films actually manage to do this kinda thing really well. Still though, there is a certain inept enthusiasm to ‘Transylvania 6-5000’ that makes it difficult for me to really hate it as such. Partly I guess, it’s just the fact that, as a fan of numerous directors whose work most of the world would tend to write off as incompetent and/or incomprehensible, I’d probably prefer to reserve my bile for films that are cynical or conceited or nasty, rather than ones like this that at least seem to mean well, no matter how badly they fail.

I don’t know much (or indeed, anything) about director Rudy DeLuca, but watching his efforts here, I sorta got this notion that maybe his own story mirrored that of Ed Begley Jr’s character – like, maybe his dad was an old time bigshot in the movie industry, and Rudy was the failing son desperately trying to get a foothold in the business. And his dad said, “well if you want to be a part of it so badly, why don’t you just go and make a picture?” So Rudy went off and hired some reasonably well known actors… and made this misfiring screwball comedy in which a bunch of guys in monster suits run around for fifteen minutes at the end. Then maybe, a few months later, he approached his dad at some industry event.. and his dad just walked away.

Probably it didn’t go like that. But I’d like to imagine it did, if only to add some underdog pathos to the 100 minutes I spent in the company of this tape.

The only genuine laugh I got out of the script came from the mayor/hotel manager, whose one joke shtick is that he’s constantly attempting to use American phraseology and getting it slightly wrong. “So d’you expect to get a lot of business here?”, Goldblum asks him. “Yes, we will be beating them off with rakes, as you Americans say!”

Yeah, that’s about as funny as it got.

A New World teaser trailer for… wait for it … GODZILLA 1985! It was awesome.

You know, this is one of those movies that my family used to always rent on VHS back in the day but the only memory I have of it is the one bar of the theme song (Transylvania 6-5 thousand, Transylvania 6-5- Oh oh oh!). Good to know I'm not missing too much!