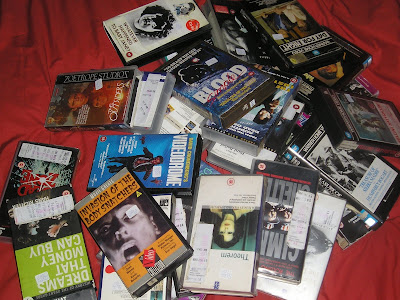 The library at the university I work at has finally decided to start clearing out its collection of ‘obsolete’ visual media, which is being deposited bit by bit on the clearout trolley for 20p a pop. 20p! That’s ridiculous! For those of you unfamiliar with British currency, that’s what? Like 30 cents? Half a Mars bar? You do have Mars bars in your country, right? No? Well you get what I mean.

Belonging as it does to an educational establishment, it stands to reason that we’re mostly looking at arthouse/avant garde/classic Hollywood fare from this collection rather than horror/exploitation shit, but still, as of 17:00 hours today there were still copies of “Sante Sangre” and “Valerie and Her Week of Wonders” sitting unclaimed… and I thought the students round here were meant to be hip! Jeez!

Anyway, I don’t know whether anyone out there has a particular fetish for watching international art cinema on fuzzy mono VHS, but if you do, check out the haul I just picked up for roughly the price of my lunch:

The Red Desert (Antonioni)
The Outsiders (Coppola)
Help! (The Beatles one)
Blood Simple (big box!)
Invasion of the Body Snatchers
Anatomy of a Murder (Preminger)
Dreams That Money Can Buy (Hans Richter)
Whatever Happened To Baby Jane?
The Dead Zone (Cronenberg / Stephen King)
Videodrome (how could anyone POSSIBLY watch this on any other format? I think I already have a copy somewhere, but, uh, I liked the cover art for this one..)
La Samourai (Melville)
The City of Lost Souls (Takashi Miike)
Hard Boiled (John Woo)
The Exterminating Angel (Bunuel)
Stalker (Tarkovsky)
Accident (Losey)
Bad Lieutenant (Ferrara)
Day For Night (Truffaut ; Warner Home Video big box! I love black & white era Truffaut more than I can possibly express, but saw the trailer for this one at the BFI and thought it looked pretty bad actually – like, the point at which he completely lost the plot or something; but hey, Nike Arrighi from The Devil Rides Out is in it!)
Juliet of the Spirits (Fellini)
Fellini Satyricon (Warner Home Video big box! Smells like an old man’s armpits..)
Treasure of Sierra Madre (Bogie! John Huston! Warner big box! Man, I love this movie, I’d buy it any time…)
The Trial (Orson Welles ; Thorn EMI big box!)
Gimme Shelter (Maysles Bros)
Theorem (Pasolini)
Woman of the Dunes (Hiroshi Teshihahara)
Suture (Scott McGehee / David Siegel – remember reading some good stuff about this some place..)
Klute (what the hell is this movie again? Donald Sutherland / Jane Fonda, some kinda ‘70s movie about… I have no idea what it’s about. The blurb on the back features the phrases ‘high-class call girl’ and ‘vicious, psychotic killer’, and it’s another funky Warner big box, so yeah, 20p well spent I hope…)

Some of these are movies I saw when I was younger, studying film in FE college and watching just about everything they had in their very-similar-though-smaller library, so it’ll be interesting to see ‘em again, but many others are completely new to me. I’ve already been trying to make ‘classic movie Sunday’ part of my weekly routine… might have to extend it to Monday, Wednesday and Thursday ‘til I get through this lot. Maybe I can start some kind of rating system, judging how each one stacks up in comparison to two hours of my life and half a Mars bar? If only I had more time.

Anyway, more to come next week I hope – I just KNOW they’ve got some horror/weirdness buried in there somewhere…
Posted by Ben at 20:22

Wow! A good collection you bought there...can't believe that all the others didn't even have a look at it !!! Enjoy your sunday classix.

Just can never decided whether or not to totally part with VHS. I have a big manilla box full of Startrek TOS vids I bought in a charity shop a few years back. I know I could probably buy the DVDs fairly cheaply and they'd take up a fraction of the space; but... the manilla box of startrek vids was a part of my decor.

It's the same with some of my horror films; I have them on DVD but there is something about the casette format that just seems right somehow.

And then there's the thought some extremely rare video might crop up. And the fact that Steven Seagal's On Deadly Ground hasn't made it onto DVD.

good collection. i am also into movies and i can say you really have a good taste on movies. i think i will try having some of the movies you have. i hope it is available at torrapps toolbar.