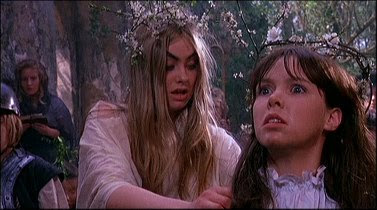 “Hail Behemoth, spirit of the dark, take thou my blood, my flesh, my skin and walk; Holy Behemoth, father of my life, speak now, come now, rise now from the forest, from the furrows, from the fields and live…”

Another one of those films whose reputation has slowly grown over the years, recent writings that mention “Blood on Satan’s Claw” (not to mention that recent BBC doc, which gave the film an applaudable amount of screentime) have tended to see the movie as the third side of a triangle of early ‘70s British ‘folk horror’ classics, alongside “The Wicker Man” and Michael Reeves’ “Witchfinder General”.

Whilst it is nice to see “..Satan’s Claw” getting some recognition, I would actually go further and declare it a greater achievement than either of those excellent films. Indeed, my enthusiasm for the movie grows with each viewing, to the extent that it currently gets my vote not only as the best British horror movie ever made, but as the kind of film against which every other horror movie should be judged. Bold claims there I realise, and in truth, each time I return to “..Satan’s Claw” I expect to be disappointed, thinking it can’t possibly live up to the expectations I’ve built around it, but each time my admiration just grows.

As with many of the more eccentric choices on this list, my love of the film probably stems more from the extent to which it appeals to *me*, than from any kind of objective ‘better-ness’, but still, when I watch “..Satan’s Claw”, I can’t help but think that whatever qualities one might be looking for from a horror film, this one ticks the boxes. It is intelligent, well directed, well written and beautifully shot. It is also violent, shocking, erotic and disturbing. It has a haunting atmosphere of heavy cultural/historical resonance, an amazing, unconventional score and a great, memorable cast. It is full of awesome occult imagery and ritualistic/psychedelic freakout potential, but also features engaging and unusual character relationships and plumbs uncomfortable psychological depths. For the less high-minded amongst us, it also features gratuitous naked witches and Patrick Wymark battling the devil with a gigantic claymore. I don’t know about you, but that just about makes a 100% hit rate for me.

Beyond the rather tenuous ‘folk horror’ tag, what Piers Haggard’s film really shares with “Wicker Man” and “Witchfinder..” is a certain seriousness of intent that immediately sets the three films apart from their contemporaries. As much as I love British horror from the ‘50s and ‘60s, it is probably accurate to say that the majority of writers and directors working in the field saw themselves at best as craftsmen delivering solid genre pictures, or at worst considered themselves to be ‘slumming’ in the widely derided horror/exploitation field. Reeves, Hardy and Haggard though were all younger men who, perhaps influenced by the increasing public interest in weird/occult shenanigans sparked off by the ‘60s counter-culture, did the unthinkable and took the subject matter of their horror films seriously, setting out to consciously avoid the gothic cliché and nod/wink good humour of Hammer et al, and investing their respective films with all the thought and earnestness and attention to detail more usually expected of an auteur-led arthouse film.

For all that though, two of those three directors still essentially emerged with a different kind of film, using the foundations of the British horror film industry to turn in a nihilistic historical drama and a strange metaphysical mystery film respectively, leaving Haggard the only contender to really turn his talents to the creation of some straight up supernatural horror.

And indeed, boiled down to a quick plot synopsis, “Blood on Satan’s Claw” is as conservative as “The Devil Rides Out” and as lurid as “Lust for a Vampire”, presenting sex and youthful rebellion as direct manifestations of Satanic evil, threatening a benevolent social status quo that can only be maintained through the intervention of a violently puritanical adult authority figure. There are several elements though that help make “..Satan’s Claw” a far more interesting and subversive work than such a summary would suggest.

Firstly, we have the gleeful pleasure Haggard takes in relentlessly pushing the envelope as regards the connections between sex and violence, and the conflicting reactions that can be generated in the target audience when said connection are taken beyond the realms of the comfortable. The film’s rape scene is of course pretty infamous, and the ghastly fate allotted poor old Wendy Padbury (familiar to 1971 UK viewers from TV soap ‘Crossroads’ and her role in the Patrick Troughton era Dr. Who) is strong medicine indeed for the relatively polite world of British film. The casting of such a recognisable actress, notable for her homely, helpless innocence, is a viciously unsettling decision by the filmmakers, and hard not to read on some level as a kind of cultural attack.

And this attack continues throughout, as the film delights in mixing eroticism with psychosis, never missing an opportunity to fuck with the hetero-male expectations of a ‘sexy horror film’. Perhaps the most astounding moment of such for me is the scene in which the rather furtive village doctor takes it upon himself to ‘cleanse’ Margaret, the captured member of Angel Blake’s cult, by surgically removing the ‘taint of Satan’ from her. Nobody much seems to talk about this scene, but I remember watching in absolute disbelief the sight of two stony-faced middle-aged men holding down a hysterical teenage girl, as the doctor tries to save her immortal soul by taking a straight razor and cutting away a suggestively shaped patch of thick, tumour-like hair and skin from her thigh. Such sickeningly imaginative imagery, carrying such a gruesome and obvious subtext, it seems to cut straight to the heart of the way a repressive religious upbringing can spark truly twisted horrors, making it’s point with a visceral power that would never have been seen in a ‘real world’ story dealing with such issues.

Secondly, and on a slightly more esoteric note, one of the keys to the film’s success I think is its portrayal of the ‘evil’ that overtakes the village’s children not as some simple demonic invasion of a god-fearing community, but rather as a completely natural, atavistic process. In “Blood on Satan’s Claw”, the land itself is evil – whether the mysterious bones lying in wait in a freshly ploughed field, or the verdant promiscuousness of the flowers in the meadows. Christianity is imposed upon this pagan landscape, not vice versa, and it can only be maintained through violence, self-denial and continual vigilance.

The demon, or devil, or whatever it is, literally rises out of the earth beneath the feet of the young people, using their natural energy and rebellious nature (not to mention their skin and hair) to pull itself back into the world and take on new form. On one level, this is a brilliant reflection of the way the fevered imaginings of the actual 17th century witchhunters served to create an incorporeal ‘evil’ in the public mind that proved just as destructive as any cloven hoofed ne’erdowell… but on another level, it can simply be read as the most bloodcurdling metaphor for the perils of puberty ever devised.

Beyond all this though, what you’ll remember about “Blood on Satan’s Claw” are the individual moments and oddly persuasive details that live on in the memory after viewing…

• The indescribable look on Tamara Ustinov’s character’s face when they drag her down from the attic – actually sends a shiver down my spine.

• The attention given to the landscape throughout, and the amazing cinematography of (no sniggering at the back please) Dick Bush - the way the dead, disembodied eye rising from the soil looks no less natural than the foreboding shots of ravens and branches that begin the film.

• The handful strange, older people who appear out of nowhere join the demonic children in their rituals, with no explanation asked or received… they seem to emerge from the woods as some kind of ‘outcasts’ from the regular, Christian community, happy to see the ‘old ways’ revived… a strange and chilling touch.

• Patrick Wymark as the Judge! I love the horror movie stand-by of the learned gentleman who initially scoffs at any suggestion of the supernatural… then sees something that changes his mind and immediately becomes deathly serious and starts busting out the grimoires and holy artefacts. (Also see Peter Cushing in “Dracula”, Andre Morell in “Plague of the Zombies”, etc.) You know that that guy means business, and indeed, Wymark’s Judge can be seen as the horror genre’s pre-eminent exponent of NOT FUCKING AROUND.

• Every single damn thing about Linda Hayden’s portrayal of Angel Blake, even the eye make-up – no explanation needed.

Appropriate to its theatrical title, “Blood on Satan’s Claw” is a rare kind of horror movie in the fact that all its horrors seem to rise unheeded from nature itself: red in tooth and claw.

You've scribed a perfect review here. Many people have never heard of let alone seen this classic. I saw it first on a television screening back in the late seventies. The characters, the soundtrack and the storyline...all works

I wasn't aware of this one, and apparently it's never been released on a region 1 DVD--thank god for torrents! Fantastic movie, I love a good story of proper English gentlemen encountering weird atavistic horrors, like Quatermass and the Pit, or any number of old Doctor Who stories. Also reminded me the old Arthur Machen story "The Great God Pan" which I read recently (apparently it was one of Lovecraft's favorites...Lovecraft also had a few good stories about creepy pagan cults, like 'The Horror at Red Hook')

Found some interesting additional background on this movie: this interview with director Piers Haggard, and a section of the TV series 'A History of Horror with Mark Gatiss' that talks about 'folk horror' movies (starting at 6:10 in the video) and features an extended discussion of this movie from 8:10-13:20 including another interview with Piers Haggard.

Thanks guys - glad you enjoyed the film Jesse; yeah, it does have a certain "Great God Pan" feel to it in places...

I did a post on that Mark Gatiss doc a few months back - really enjoyed the British horror episode!

Wow, I've never heard of this. Good work on choosing obscure stuff for your favorite picks! Always a sign of a true horror fan.

thanks for the suggestion! never heard of it. watched it last night and you are right on all counts! I love your writing by the way...